On October 19, 2017 we travelled to Cathedral Gorge State Park in Nevada. The campground is approximately two and a half hours north east of Las Vegas and about an hour and a half west of Cedar City, Utah. I am sure this is a very hot and uncomfortable place in the summer months, but this time of the year it was perfect. 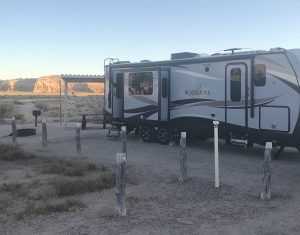 We took site number 5 which was flat and long enough to accommodate our trailer and the truck parked sideways across the entrance. The site had 30A and 50A electric hookups, but no water or sewer. While we used the electric, it would be much more appreciated in the summer when the AC would likely run day and night. The site also had a nice table, shade from the sun and a fire pit. The only strange thing about the site is that it is surrounded by posts. We learned through experience that if you park to close to the posts to make room for the truck, the pop outs will run into the posts. We only had to move the trailer once. 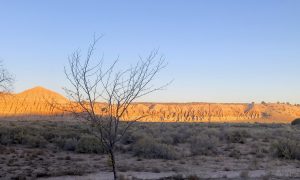 To the rear of our trailer the view was simply flat desert with distant cliffs. However, this provided great views of the stars and an occasional glimpse of wildlife.

One night I was grilling hamburgers and had three slices of cheese at the ready. I wasn’t using any light source as the glow from the trailer an 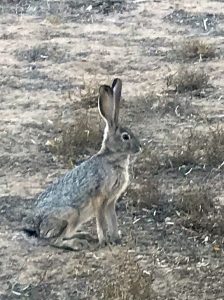 d natural light provided just enough to get around. I stepped into the doorway of the trailer to ask my wife a question and then immediately returned to the grill. When I went to place the cheese on the burgers, it wasn’t where I left it, it was gone. I don’t know what took it, but it was kind of creepy thinking something was paying enough attention to me to notice when I left and what I had left behind. Perhaps it was one of these little rabbits? I was just grateful that whatever it was it wasn’t a meat eater. I had more cheese, I didn’t have more burgers. 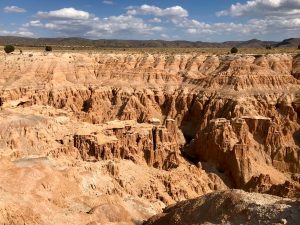 Over the next few days my wife and I along with our son and his friend hiked around Cathedral Gorge. Most of the hikes are short and pretty easy. There is one four mile hike that we never got around to doing because my wife severely sprained her ankle. We were all enjoying the Caves, which are really super narrow canyons, when the kids came to get me because my wife had heard her ankle make a 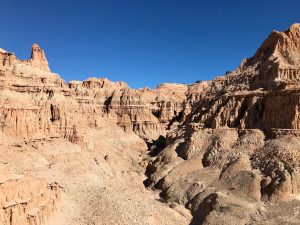 terrible noise and she was in severe pain. I thought at first they were pulling my leg, pun intended, but sure enough I found her in real agony. We walked very slowly back to the trailer, got her seated, the ankle wrapped and put on ice. She took the next couple of days off while I cooked, cleaned and entertained the children. I am still not sure she really hurt her ankle 🙂

On October 23rd we headed home. We enjoyed Cathedral Gorge and will come back to hike the trails we missed.