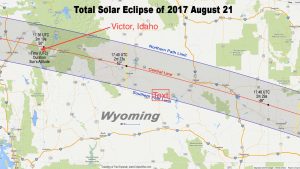 On August 20, 2017 we headed north to Victor, Idaho to catch a glimpse of the total solar eclipse the following day. Victor is in northeast Idaho and very close to the center line of the eclipse path. We were hoping for a great show. 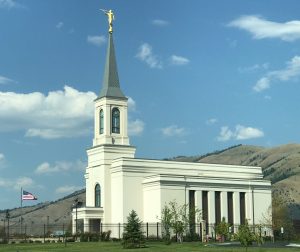 To avoid expected traffic on I-15, we drove up through Evanston, Wyoming, through Star Valley, Wyoming and then west into Idaho. Early in the afternoon we drove through Afton, Idaho and caught a glimpse of the Star Valley Wyoming Temple owned by the Church of Jesus Christ of Latter-day Saints. It was quite beautiful set up on a small hill with the green grass, mountains, and blue sky in the background.

We continued north until we arrived at the farm belonging to our friend’s father. They have a beautiful spread of about 130 acres with a 4-5 acre 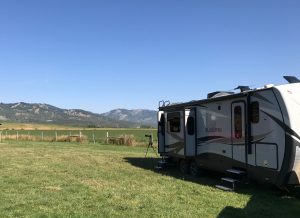 parcel containing homes, cabins and barns. To our great surprise they also had full RV hookups and were kind enough to allow us to use them. We pulled in, leveled up, left the truck and trailer connected and spent the rest of the afternoon and evening getting to know an entire family of new friends. It was great to get to know new people and learn a bit of their history including the homesteading of this property. It was a beautiful spot with plenty of clear sky to enjoy the eclipse. 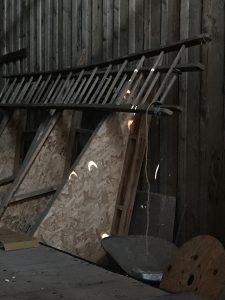 The next morning we built pin hole projection systems and watched the moon creep across the face of the sun. We also brought glasses that made it safe to view the partial eclipse. I mentioned that barns are often great pin hole projection systems because they’re reasonably dark with plenty of small holes for the sun’s rays to come through. The entire group entered the barn and found a stunning array of great partial solar eclipse images.

The time we were all waiting for finally came. The shadow of the moon crept quickly across the farmland and then totality began. It was amazing listening to the voices of young and old as they grasped for words to express their emotions. The frogs had come out and were croaking loudly, the birds had all roosted, people were grabbing jackets to cope with the 15 degree drop in temperature and everyone was running around trying to do everything they wanted to experience in the limited time.

I quickly setup my Canon 5D Mark III with a 200mm f4 Canon lens and shot several pictures at each of many settings. I share a few of the best 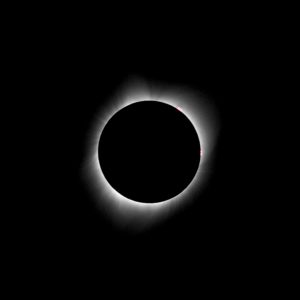 here. The first was shot at ISO 200, f8 for 1/250 second. At the 1 o’clock and 3 o’clock positions on the disk you can see small red flares. I first thought these were chromatic aberration or other camera artifacts, but I later looked at images taken from other locations that contained the same features. I assume they are solar flares.

Unfortunately these images are quite low resolution because of the necessary cropping to make them large enough to enjoy. If I were to do this again, I hope I get the chance, I would use at least a 400mm lens to enhance the results. 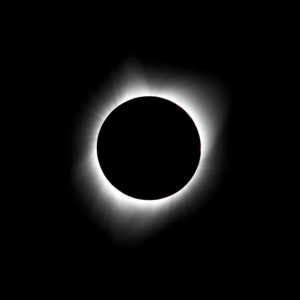 The second image I share was shot at ISO 200, f8 for 1/100 of a second. The result is a much brighter view of the corona. In this photo the flares are still there, but they are much harder to distinguish because of the brighter corona.

The final image I share was taken just as the sun revealed itself at the end of totality. This diamond ring effect is stunning, but made even more so by the minutes of 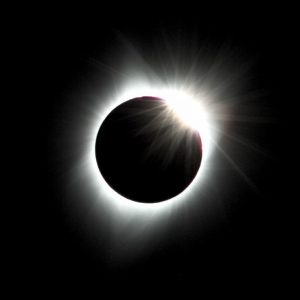 darkness preceding it. This was a very pleasing sight that won the cheers of those around. This shot was taken at ISO 200, f8 for 1/50 of a second. It is my favorite shot of the three.

It was quite amazing how quickly it got bright after totality ended. It doesn’t take much of the sun’s surface to light the earth. The frogs went quiet, the birds awoke and everyone was very quiet trying to grasp what was experienced. It was absolutely amazing!

We packed up, said our goodbyes, promised to send prints and left for home. Little did we know that the four hour drive up would take ten hours to repeat going south. The traffic was horrendous from Victor, Idaho to 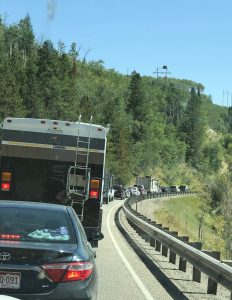 Alpine Junction, Wyoming. I think the police officers in that little town had no idea what hit them and had no clue how to deal with the huge number of vehicles traveling through their little town. Once we got through Alpine Junction we travelled at 60 mph the rest of the way home. Four hours up, ten hours back and I would do it again for what we experienced. It was an amazing and unforgettable experience. My son will remember that day and will get his sons to the Great American Eclipse of 2045 in Utah.