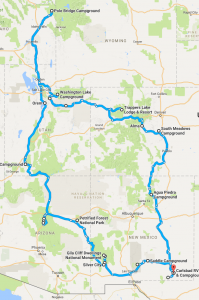 On July 20, 2017 we arrived at Carlsbad RV Park and Campground in Carlsbad, New Meexico. We arrived in time to check-in, park, hookup, and cook dinner. It seems funny calling parking with 100 other RVs hooked up to utilities camping, but it’s as close to camping as it comes near Carlsbad Caverns.

While the RV park sort of setting is not my idea of a great camping experience, the Carlsbad RV Park and Campground was clean, the staff was helpful and friendly, the pool was refreshing, the dog run was acceptable, and the park was quiet. It made for a good base of operations to see what 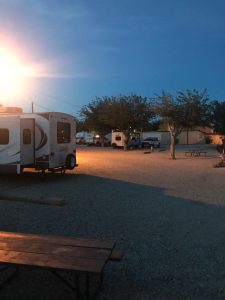 we came here to see, the caves.

The next morning we rose early and left the trailer at about 7:30am to get to Carlsbad Caverns early enough to make our reserved cave tour at 8:15. While in Colorado we made reservations for a tour of King’s Palace. We would have loved to tour other parts of the cave, but other reservable tours were full. In addition, several of the other more strenuous tours require participants to be 12 years old or older. We’ll come back.

When we arrived at the park I took a look at my watch and was very unhappy that we had missed our tour time due to a time zone change. My phone confirmed the time. We went into the visitors center to see what could be done. It turns out that while we were in New Mexico we were up high on a plateau overlooking Texas to the south. My phone, and therefore my watch were getting their time information from a Texas cell tower broadcasting central time. We were early and happy!

From within the visitors center we took the elevator down about 800 feet and joined our tour group. The tour of King’s Palace was about 1.5 hours long, was interesting and quite beautiful. These caves were formed 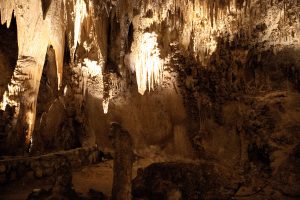 differently than others we’ve been in and learning about the process was interesting.

After our tour of King’s Palace we took the self guided tour of The Big Room. It was easy to get to because it’s simply another path leading out from the cafeteria / gift shop area 800 feet below the surface. The Big Room is w 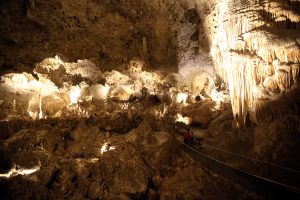 ell named, it is huge having an area equal to that of 14 football fields. The trail around the room is smooth, easily traversed and has many signs yielding information. The decorations are quite spectacular and when you take into account the sheer number of them, it is quite amazing. The trip around 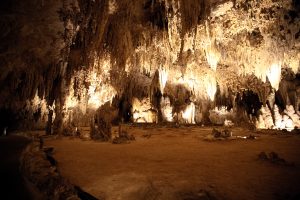 The Big Room took us about 1.5 hours, but that included several stops for pictures and to admire the handy work of God. 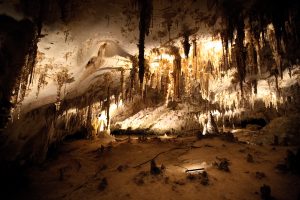 After our tour of The Big Room, we got in the five minute line for the elevator back to the surface. We were glad to have done this early in the morning because evidently later in the day the wait for an elevator can be as long as two hours.

At the surface we shopped at the gift shop and headed back to Carlsbad for lunch at Angie’s Mexican Restaurant and a peaceful afternoon. 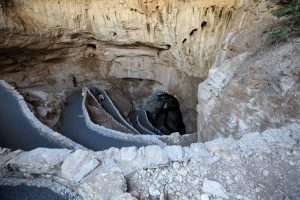 Entrance. We had been told that this is difficult, hot and a tough hike. It took us just 50 minutes and was none of the above. It was easy, but frankly less interesting than the other two tours. It was fun and worth doing, but not as decorated as the other parts of the cave. As you continue down you make the transition from full sunlight, to a partially lit area to 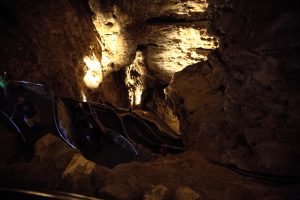 complete darkness. Amazing to think that someone long ago found this entrance and struggled through the darkness to map a considerable amount of the known cave.

If we had this to do over again we would do things a bit differently. We would reserve more guided tours, but we would also do what we did in a different order. We would enter the Natural Entrance at 8:30 when it opens and walk down for the King’s Palace tour at 10am. After the King’s Palace tour we would walk around The Big Room and take the elevator back to the surface. This would give you a great sense of the cave in one day. It also allows you to enjoy the Natural Entrance without comparing it to other more spectacular parts of the cave. In addition, the guided tour before The Big Room would help you appreciate it even more.

At dusk we sat in the amphitheater and watched the bats emerge from the cave. It is interesting how they come out and circle in the entrance as they climb. When they reach the top of this “bat vortex” the leaders head south while more bats join the vortex at the bottom. This continues for 30-45 minutes until they’re all gone. Nice experience.

On Sunday July 23rd we attended the Carlsbad Ward of the Church of Jesus Christ of Latter-day Saints. It was nice to worship with the saints in Carlsbad. After church we hooked up the trailer and headed north to Roswell, New Mexico to see the International UFO Museum and Research Center. We knew we were nearing the museum when we saw aliens. 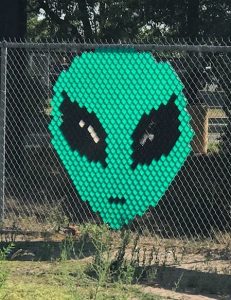 One must visit the museum if you’re driving through Roswell, but I wouldn’t go out of my way again to see it. In fact, I wouldn’t cross the road to see it even if I found myself in Roswell again. The name alone is a stretch, but after you enter and pay your fine for being dumb enough to enter you’ll see nothing more than what you’ve seen on TV, in the movies or on the cover of the National Enquirer.

Having not been abducted by aliens we decided to drive west from Roswell towards Cloudcroft, New Mexico. We figured a trip back to 9000 feet would be cool and refreshing. 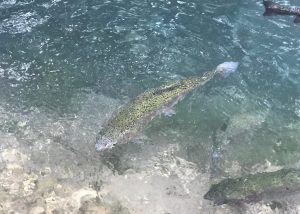 Along our path we came across the Tom and Pam Runyan Ranch. This is simply a family run petting zoo, fish farm and market on the side of the road. We stopped and petted animals, admired the huge trout in the ponds and bought a few edibles. 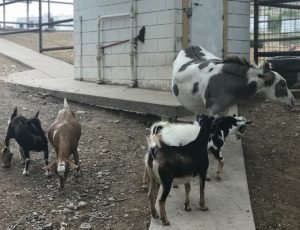 I think we would have fished in their ponds, but you had to keep what you catch and we were on the road. It was everything I could do to keep my wife from grabbing those beautiful big trout. This was a beautiful spot that made the pain of the UFO museum fade and made the remainder of the day better.

We continued west towards Cloudcroft and arrived at Saddle Campground in the late afternoon. We had time to get settled in and then watched a thunderstorm blow through. It was cool enough to wear a light jacket and that was awesome!