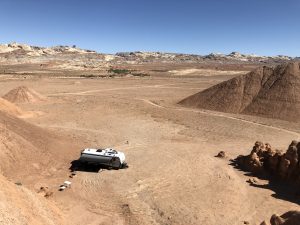 On Thursday May 24, 2018 we retrieved our trailer from its winter storage for the first time in 2018 and headed to an area near Goblin Valley State Park in Utah. We were joined by a son and his family and a daughter and her family. One of the families arrived on Friday and the other on Saturday. We chose not to stay at the state park, but rather boondocked in some neighboring BLM land at location, 38.569091, -110.743433. As you can see from the image, we didn’t have a lot of neighbors even though it was the Memorial Day weekend. More showed up as the weekend progressed, but none were close enough to be heard or bother us. 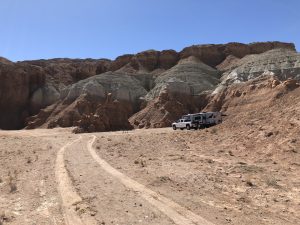 paved roads. The last couple of miles were on dirt roads with lots of ruts and bumps. While it wasn’t smooth, it was easily managed at low speeds. The boondocking sites are so large you simply drive around in them until you find a place that’s level enough to add the final touches. As others arrived it was easy for them to “circle the wagons”. It was a great spot, but I think in the future we’ll try someplace just to the north of this area where we expect to find a bit more slick rock and a bit less dirt and sand.

The temperatures were in the high 80’s and low 90’s each day, but cooled 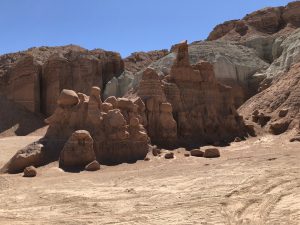 off rapidly in the evening. The wind came up each afternoon about noon and blew pretty good, about 15 mph. The wind kicked up considerable sand and dust and made for pretty uncomfortable conditions for a few hours each day. However, the landscape was beautiful and the night skies were spectacular in spite of the nearly full moon. The children had a great time climbing in the rocks and rolling down the nearby sand hills.

On one of the days we hiked the nearby Wild Horse Canyon trail. This is a slot canyon that is only a few feet wide in some spots. We spent one of our days walking through Goblin Valley. The kids liked this as well and even though I have been there many times, it was still enjoyable. During our next visit to this part of the state we’ll try and hike the Ding and Dang canyons. I have heard they’re amazing!

We returned home, cleaned the trailer thoroughly and returned it to storage until the next outing in the middle of June. It was fun having the trailer out and can’t wait for the next outing. Perhaps I enjoy the trailer too much. I’ve been telling people for a couple of weeks that I am unhappy to have to go to Hawaii for a week because it will get in the way of going camping. Truly I have a problem!