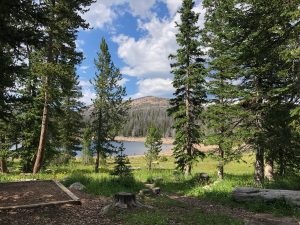 From July 13th to July 20th, 2018 we camped at Trail Lake Campground in the Uinta mountains of Utah. After a winter seeing little snowfall, the lake was quite low. I’d guess the water was 20′ lower than normal. With the gentle slope of the shore near the campground that resulted in the lake being an extra 100′ or more from the campsites. 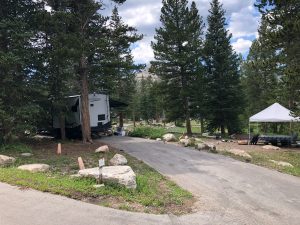 The campground is at 9800 feet of elevation and has forested and open meadow sites.  We stayed in site 59 which is a pull-through site near the beginning of the campground. The pull-through site was protected from the campground road by several large pine trees and provided ample shade. There were also trees throughout the site making it beautiful and easy to find shade from the afternoon sun. The site also had a nice view of the lake. 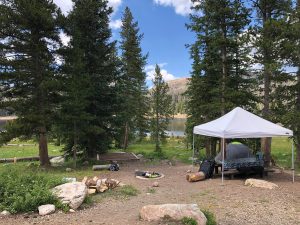 The site did not have many good tent spots. There was a small site near the table suitable for a four man tent. Large tents must be placed closer to the lake in the meadow area, but these sites are a bit sloped.

We were worried about two issues getting into Trial Lake with our truck and trailer. The first was the spillway you must cross to get into the campground. There is no water in the spillway, but it is a significant dip and I was a bit worried about bottoming out. 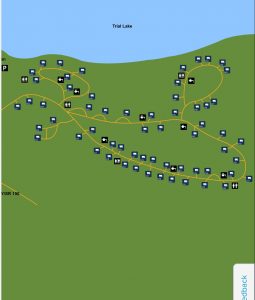 We have a 27 foot trailer with about a 3 foot tongue for a total length of about 30′. We had no difficulty with the spillway and had likely a foot to spare before we would have rubbed the hitch or bumper.

While at Trail Lake we were joined by our daughter and her family. In addition, we had a friend of our son stay with us for several days. The nine of us were also joined for one day by two other sons and two of one son’s children. It was a bit tricky keeping track of who was there and who was coming and going, but it also made it really fun. One of our grandsons caught a fish which repeatedly “slapped him”. He loved telling everyone that he was slapped by a fish.

One night it was beautifully clear until about 11pm when we put out the fire and prepared for bed. We noticed lightening on the horizon and prepared our camp for a thunderstorm and associated wind and rain. The lightning got closer and closer, then we could hear the wind coming through the trees, and finally the rain began. For a couple of hours we enjoyed watching the storm come, linger, and then pass. 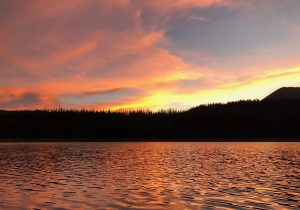 Other evenings began with spectacular sunsets over the lake. The clouds were thin and the sun shined through them just before setting. What a beautiful sight from a float tube while fishing.

With our new batch of guests we again hiked to Ruth Lake. It was fun to watch the little kids have fun in and near the water. 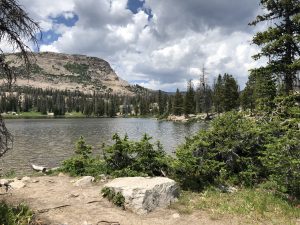 Our dog jumped right in and swam out to his owner, our son, and his friend. That’s the first time we’ve seen him simply jump in and swim. He usually plays by the shore and doesn’t mind getting wet and muddy, but never before has he voluntarily swam.

We had so much fun hiking Bald Mountain that we sent our daughter and her husband and two of our older sons to try it. They said they enjoyed it, but I don’t think they liked it as much as we did. I guess we have to be careful not overselling things.

On July 17th our family departed and on the 18th the parents of our son’s friend arrived to take him home. The three of us were left alone for the first time in over a week. I was worried our son might be lost without others, but we had fun playing games, watching movies, and fishing at night until dark. One night he out fished both my wife and I and was very proud of himself. We were proud as well and were very happy that he’s learned to enjoy fishing. We had a great time and worked together well on the 20th to return home.

Two straight weeks in the Uintas was great. We added 48 gallons of fresh water to our initial 80 gallons, but we made it. We’ve been wanting to do two weeks in these mountain for decades; we finally did it!

There are 60 sites in Trial Lake Campground. The campground is spacious and is stretched out down the lake shore. While we were camping there was no running potable water in the campground. To acquire drinking water you had to travel a short distance up the highway to Lost Creek Campground.

While we enjoyed site 59, if we were to return we would select site 57 or 58. Site 57 is a back-in site with no privacy from the campground road, but has beautiful views of the lake and an enormous meadow to the east of the site that makes it a great distance from other sites in that direction.

Site 58 is a pull-through site with little privacy from the campground road, but several pines have been planted and in a few years will provide ample seclusion. Obviously this site is between 57 and 59, but not over crowded.

Site 59 was great, but two different large families used sites 60 and 4 as if they were a single group site. These two together are very close to 59 and can get a bit loud. If a set of sites were wanted for such a gathering you couldn’t go wrong acquiring sites 59, 60 and 4. It would be a lot of fun.

Trial Lake Campground was a nice place to spend a week. The lake was fun to play and fish in. Can’t wait to be there again.