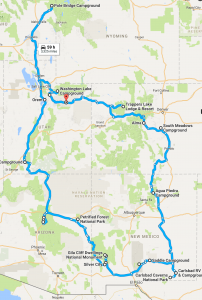 After leaving the Washington Lake Campground, we headed to Heber City, Utah to run a few errands. We had no definite plans for the remainder of our adventure, other than to visit Carlsbad Caverns. With that goal in mind and being in need of a dump station, we headed east to Starvation State Park.

When we arrived an hour and a half later and with the day coming to an end, we asked if there were any sites left at the Beach Campground. We ended up in site 16 for two nights and enjoyed the stay. While site 16 is not on the beach it is away from other campers and was a peaceful spot to rest and relax. The site had water and electric hookups. Th

e electricity was appreciated because the temperature at Starvation State Park in July necessitated the use of air conditioning. This was the first time we had used the AC in the trailer and while it doesn’t cool down quickly it is eventually refreshing.

On Monday we invited one of our daughter’s family to join us at the lake for a day of swimming and fun. The three grandsons and their parents were a lot of fun to interact with. At the end of the day we fed them and sent them on their way. It was the last time we would see family for nearly a month and was an emotional farewell for me. There were many times during our trip where we mentioned how fun it would be to have family with us.

While at Starvation State Park we had great cell connectivity that allowed us to take care of a few things online, including determining where we would next stop. We determined to head to Trappers Lake in Colorado.