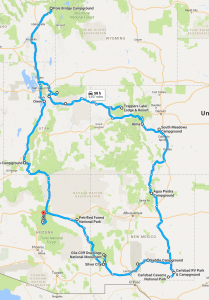 On July 26, 2017 we arose, ate a great breakfast and got underway towards Arizona. We left the Gila National Forest area with some trepidation. New Mexico was quiet, spacious and interesting. We knew that the part of Arizona we were headed towards was more populated and we weren’t sure what to expect in terms of camping and availability.

While traveling west we noticed that the Petrified Forest National Park was not far out of our way. It is in the northeast corner of 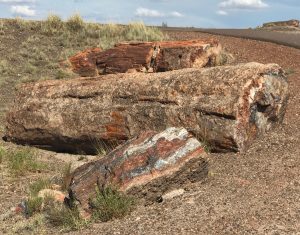 Arizona and accessible via Highway 180. We entered the park through the south entrance and headed to The Giant Logs trailhead. It is a very short, pet friendly, loop just behind the visitor center. As the name implies the loop features many quite large, even giant, petrified logs. After this short hike we drove further into the park and found the Crystal Forest trail. This hike was much longer and while it was easy going, it was very hot. The trail 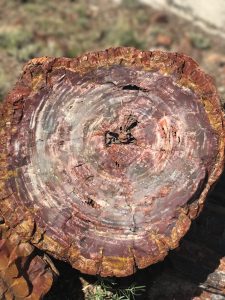 didn’t really offer much more than The Giant Logs trail, but it was fun to be out and about.

It was interesting seeing so many petrified logs in one area. I guess that’s why it’s called a forest. On their sides the logs are impressive in terms of length and sheer size, but the end cuts are quite colorful.

We exited the park through the same gate we entered and continued west towards Flagstaff, Arizona. Near Holbrook, Arizona we noticed many stores had large petrified logs out front for sale. I guess what you find outside the park can be collected and sold.

We had an amusing incident in Flagstaff. Remembering the fuel situation we had in our last area, we decided to refuel in Flagstaff before heading south towards our planned destination of Pine Flat Campground. We went to one gas station after another only to find that none of them carried diesel. When we finally found a station that carried diesel it was in a crowded section of town. We entered the station and found that the diesel pump was on the wrong side of the truck and the hose would not reach. We left the station drove around the block and reentered from a different direction. We then noticed that the exit we were planning to use dumped onto a road that had a center divider, blocking our route to the other side of the road. We spent a significant amount of time backing the trailer up, wiggling it into a position where we could fuel and escape, and inconveniencing a few other potential customers. We finally fueled and successfully got on our way, but I think it was the longest fuel stop we’ve ever experienced.

The fun didn’t stop there. The sun was setting and south of Flagstaff we encountered road construction. This was some serious construction. For several miles we were the first vehicle behind the construction lead car that wove left and right down the one lane road of dirt between cones and signs. It had evidently rained very hard for some time just before our arrival and the mud was at least a foot deep. There were many spots where we had to switch to four wheel drive in the hope that we could stay on the road and keep up with the lead car. It was pretty nerve racking, but my wife’s excellent driving got us safely through. 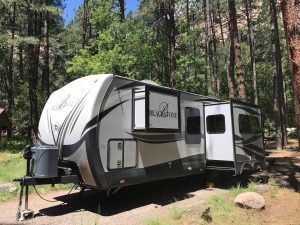 completely full. We had worried about this all the way here, but that didn’t make it any easier. We were tired of tight gas stations, road construction and the day. Fortunately, the next campground down the road, Cave Spring Campground, had one spot left that would accommodate our vehicles. The camp host helped us back into the spot and we were set.

The next day we slept in, ate breakfast and simply hung out at the trailer. Our son hung a hammock between two trees and rode his bicycle around the camp a few times. It was pretty relaxing compared to the previous day.

The Pine Flat Campground was an amazingly crowded and busy place. Even on weekdays it filled to capacity each night we were there. The camp sites are very close together. Where we backed in we had a table and fire pit just behind the trailer and then about 20′ of open dirt to the camp sites of three neighbors. Some of the sites are like camping duplexes. The back in parking spots are only separated by short logs space a few feet apart and then both neighbors camp directly behind their vehicles. One tent could not possibly be more than 10′ from their neighbors’. This was our least favorite campground of the entire trip.

In the afternoon a thunderstorm came up with some very close lightning strikes and powerful canyon thunder. We travelled down to Sedona, Arizona to have pizza that our son was craving. Afterwards we returned to the trailer, played games and went to bed.

The next day, July 28th, we drove down to Slide Rock State Park and paid our $30 entrance fee to go swimming. This park is not pet friendly and we were obliged to have one of us stay with our pet at all times. It was not lawful to keep the dog in our trailer without being with him. My son and wife hiked 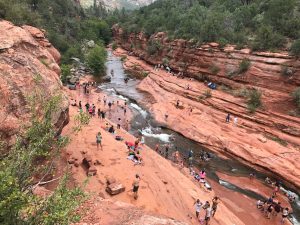 down the path towards Slide Rock while I watched Leo. They played for a while and then came back for me. I switched with my wife and my son and I went swimming. There were lots of people there with their dogs, I guess they were service dogs and comfort animals.

Slide Rock was pretty interesting and fun. Basically the river, Oak Creek, carved its way through the sandstone and created an 80′ long slide 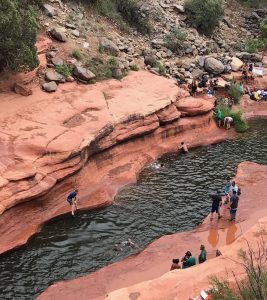 through it. The algae makes the rock a bit slick making it ideal to simply slide from the top to the bottom. Unlike the river in the Gila National Forest, Oak Creek is very cold and the hardest part of the slide is getting in. In addition to the slide, there is a deep swimming hole and short cliffs you can jump off into the water. You can see from the number of people in the photos that this place is well known and popular. It is just like going to a water park with parties, loud music and lots of people.

After Slide Rock we retuned to the trailer just in time to experience a huge thunderstorm at the camp. Very close lightning with enormous, booming thunder. We were in swimwear so we simply sat out at the picnic bench and watched the rest of the campground try to stay dry. At one point I danced with my wife on the table singing Dancing in the Rain, it was fun. We went inside, showered, warmed up, ate dinner and watched Pirates of the Caribbean 2. – the beauties of having a trailer!

When the rain reduced to a drizzle and the sun went down, people started to build fires. The wood was wet, the air was heavy with moisture and the smoke was very thick. It reminded us of a scene from Pirates of the Caribbean. We walked around the campground wanting to say ARGH.

The next morning we awoke and had a strawberry flavored oatmeal from our food storage. It was absolutely awful. Potentially the worse thing I have ever eaten, and absolutely the worse thing I had eaten on our adventure. One bite each and we put it right where it belonged, the trash can. We then made normal oatmeal and it was amazingly good given the appetizer.

We headed south on our way out to miss the road construction nightmare to the north. We went through Sedona and then headed north on Highway 17 back to Flagstaff. This scenic byway was much better than the 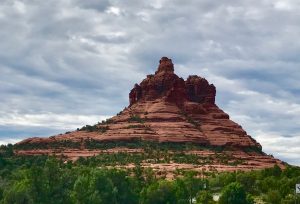 construction war zone we traversed days before. Instead of mud, delays and construction equipment we enjoyed beautiful red rock hills and lush trees along the creek. We avoided our favorite gas station in Flagstaff and headed north towards our home state of Utah. We had one more night of camping before us and we were hoping for a much quieter and peaceful experience than what we had in Arizona. 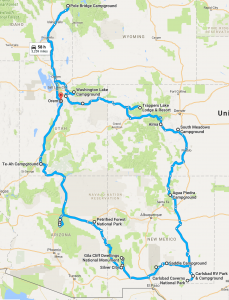