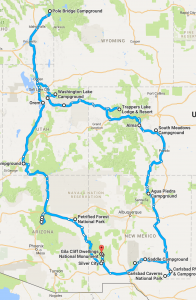 On July 24th we left Saddle Campground and headed west towards the Gila Cliff Dwelling National Monument. We had determined to stay in Scorpion Campground, a very unappealing campground inside the national monument, but found a pleasant alternative on our way called Forks Campground. We were excited for the adventures ahead, but the late date in July and heading west meant our trip was nearing its conclusion.

We had heard that sliding down the dunes at the White Sands National Monument on snow sleds was fun. Surprisingly, we didn’t happen to bring our sleds with us on our July vacation. We stopped in Alamogordo, New Mexico and believe it or not the Walmart there carries snow discs all year round for nuts like us. We purchased three and headed to White Sands. 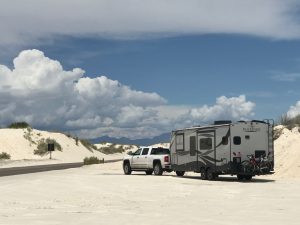 We arrived at the dunes about 11am and the day was hot already, about 90 degrees. However, the sand here is made of gypsum rather than silica and stays cool to the touch in spite of the temperature and sunlight. The sand packs well, but is soft to the touch. We had fun sliding

down the hills, watching the dog dig holes and simply taking in the views. If I were to do this again I would arrive at 8am or 9am and enjoy the cooler hours. We have also heard the sunsets are stunning.

From White Sands we continued west towards the cliff dwellings. We drove to Silver City, New Mexico and then headed north through Pinos Altos. The road from there to the campground was crazy. It was 16 miles of reasonably steep, but amazingly twisty road. Signs indicate that the road is for two way traffic, but too narrow for a center line. The signs indicating an upcoming switchback were u-turn signs. There were several switchbacks where we had to take the entire road and hope there was no oncoming traffic. We came around one of these and there was a Prius with two women in the front seats and they looked scared to death. We later learned that approaching more from the east is a much easier drive, but not nearly as fun. 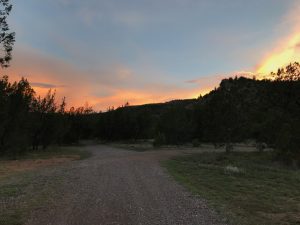 After the road became wider, straighter, and flatter we found Forks Campground. It’s a big rather primitive free campground where each site has a fire pit, but no table. It was completely deserted and perfect for us, and much better than where we were headed. We 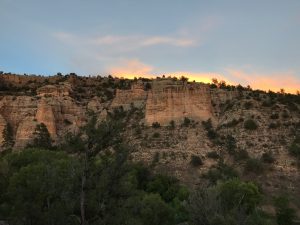 took a pull-through spot near, but above the river with a great view of the cliffs to the east.

We setup camp and then headed north towards the Gila Hot Springs Campground. This is a private campground with only a 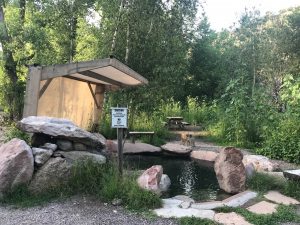 few sites and poor access for any trailer over about 20′. However, for $5 a person you can soak in the hot spring water. The owners have created three natural looking pools on the shore of the river that they pump hot spring water into. Some of the pools have sunshades over them, while others have clear views of the night sky. The pools were clean, cle 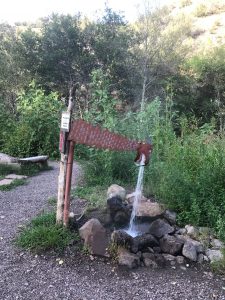 ar and about 102 degrees or so. These were a fun discovery!

The next morning we again travelled north, but this time to the Gila Cliff Dwelling National Monument. We looked through the visitors center and then took the short hike to the cliff dwellings. The volunteers at the dwellings were informative and fun to talk to. Our son was excited that they knew something about the local lizards that he 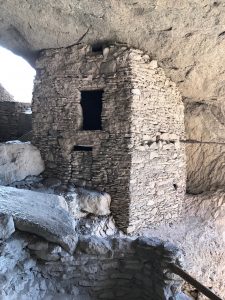 caught on the way up the trail.

After our hike wetook a drive in search of diesel for our truck. We ended up having to drive one hour down the canyon before we found a station. By this time the 36 gallon tank was nearly empty. We put just over 35 gallons in the tank and were thankful we didn’t wait any longer. We were low on fuel when we started up the canyon the night before, but decided to take a chance. Bad idea! Lesson learned, before heading up the last stretch of road before camping, GET FUEL! 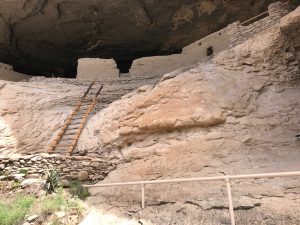 With the truck full of fuel we headed back to camp. We filled our water toys, tube, etc. and head down to the river. The river was wonderfully warm and had great pools to play in. We floated down baby rapids and had a great afternoon.

After dinner that evening we made a fun discovery. We were sitting out under the stars and for some reason I turned on my flashlight and pointed it upwards. This attracted insects into the cone of light which in turn attracted bats. It was very fun to see bats in flight, up close, feeding and illuminated. I’m looking forward to trying this on future trips.

The next morning we awoke, packed, ate breakfast and headed south and then west to the Sedona, Arizona area. While we had many great experiences on this trip, I think the Gila National Forest area was my favorite because it had points of interest, a nice campground, the weather was great and there were no crowds anywhere. I’d love to come back to this area.